​
​Mangroves, submerged aquatic vegetation, citizen science, ... and more!​
**** This page is currently being updated, please check back soon for full updates****
The rise in human population exerts enormous pressure on natural systems because of increasing demand for natural resources. As a result the functioning of the biosphere is being severely affected. Climate change, pollution, fragmentation are all the result of global change; yet the effect of these phenomena differ across different spatial scales.
At the core of my curiosity as a researcher is the question of how species  have reacted in the past, how they are reacting, and how they would react to future changes in the environment - Move? Adapt? Acclimate? Die? In all the madness of the anthropocene, will the species I study (and others as well, of course) MAAD?
And how can indigenous people participate in restoration of degraded habitats?
My current research areas spans phylogeographic patterns to understand how historical environmental changes have shaped current distribution of genotypic variation; and extends to understand the impact of more contemporary processes such as climate change-induced sea level rise, disturbance and pollution on dispersal and the distribution of genetic variation. In application of scientific research, the third arm of my research involves assessing the willingness, education and incorporation of local people in grassroots restoration projects (i.e., via citizen science).
Research in the spotlight 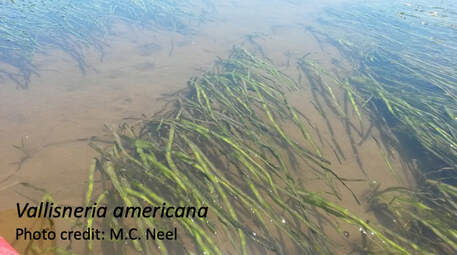 Historical and Contemporary Drivers of genotype and species distribution
Climatic oscillations of the past posed strong pressures on species and caused them to respond in different ways. And for some wide-ranging species, their responds to the past climatic disturbances were not uniform across all spatial scale of their range. Understanding how historical processes might have influenced the contemporary distribution of species  has fundamental implications for elucidating how species will respond to current and future changes in the environmental. The use of next generation sequencing (NGS) technology allows for us to investigate distribution of genetic and species variation and the underlying mechanisms of adaptation to the environment. As a postdoc at Dr. Neel's Lab, I am employing NGS technology and complementary bioinformatics techniques to study patterns of phylogeography in the submerged aquatic plant Vallisneria americana, with samples from across it's entire range in the US Eastern seaboard (i.e., Western Atlantic coastline).
In the future, I plan to also use similar NGS and bioinformatic technologies for a detailed understanding of mangrove phylogeography and expansion along the Eastern Atlantic coastline; and to collaborate with other colleagues studying the New World Mangroves to evaluate trans-Atlantic dispersal in mangrove species (Rhizophora spp and Avicennia germinans). Such insights will be informative for predicting and forecasting population/range dynamics under future climate scenarios.
On the other hand, by increasing saline intrusion into freshwater habitats, many species are at risk of being destroyed if they cannot adapt fast enough. Meanwhile local adaptation could occur at some impacted sites causing isolation (via soft barriers) of patches which were historically connected. At the same time, increasing saltwater could affect propagule buoyancy, and growth thereby affecting establishment.
Disturbance and Genetic connectivity
Disturbance and dispersal are two crucial processes that shapes the natural systems from genes to ecosystem levels. Yet Fragmentation and climate change-induced extreme whether events, are increasing in magnitude and extents worldwide, exceeding thresholds for many ecosystems and therefore resulting in population and biodiversity losses.  By reducing population sizes, fragmenting large population patches, and even completely destroying some populations, disturbance events (e.g., fragmentation, sand mining, and extreme weather events) can affect the natural network of systems, render sites unsuitable and impermeable, and alter hydrodynamic patterns, and thereby affect the genetic architecture of species in highly disturbed environments. Understanding how disturbance of great magnitude affects dispersal, gene flow and the distribution of genetic variation across a landscape is crucial for strategizing management.
I also assessed levels of bioaccumulation of trace metals in organisms inhabiting highly polluted environments. I published on this here. After observing for extended periods the input of oil pollutants into many aquatic systems, I am planning in the future to  evaluate the effect of oil pollution on mangrove propagules (floatation, growth, and dispersal).
Participatory ecosystem management:​ BeeMangrove Project
At the current rate of biodiversity loss and environmental degradation, all hands are needed on deck if we must stop/reverse the effects of human actions and restore impacted habitats. Yet, people value ecosystems differently and for different reasons (economic, social-cultural, ecological reasons). So get all hands on deck for any restoration project,  there is need to understand how systems are valued and perceived, and to pivot such information to design effective restoration efforts that will target a large audience of participants.
At the core of my research is the interest to bridge the gap to educate local indigenous people in tropical Africa to participate in the restoration and management of declining mangrove ecosystems.
Data from conventional scientific knowledge, with personal observation, show that mangroves of the Cameroon Estuary suffer pollination limitation. In addition to pollinator limitation, the cultural differences between the English and French regions of Cameroon could play a significant role in causing shifts in use, perceptions, and valuation of mangrove ecosystems. And the CEC presents a natural experiments to test this hypothesis because not only is it the most anthropize mangrove area in Cameroon,  it lies across the English and French political regions of the nation. With increasing human encroachment into the mangrove  from the landward edge and increasing sea level rise from the seaward edge, which are already causing massive mangrove die backs, mangroves of the CEC are extremely vulnerable. Mindful of the fact that with increasing sea level rise, mangrove areas which were initially inaccessible to local people will now become accessible via boats, SLR could potentially increase the logging pressure by local people, if local communities do not take the lead on the management and protection of these systems.
My quest to marry conventional scientific knowledge, with local ecological knowledge and participatory forest management of these declining and vulnerable mangrove area birthed the BeeMangrove Project.
EMAIL ME
Do we have shared research interests? Contact me let's talk further.